As Local as It Gets

From brews to beef, the Brewing Station is coming full circle with our latest specials. A new concept small town breweries are starting to adopt is a win-win for farmers, brewers and the environment. During the brewing process, a large amount of malted barley is left over, creating extra waste that has to be properly disposed of. Instead of paying someone to collect the leftover malted barley, local farmers have been collecting the spent grain from small town breweries and using it as a nutritious food source for their livestock.

The Brew Crew is always looking for new ways to reduce our footprint and become more environmentally conscious as individuals and as a business. Just like our wind-powered brewery and plastic straw ban, we loved this idea of reducing our energy and waste and helping our local community. For the past four years, Hertford, NC farmer, Russel Cartwright, has been using our spent grain to feed to his cattle. In October of 2017, we bought the first cow raised on our spent grain with the plan to create a weekly Pasture to Plate menu.

Come out this off-season and try some beef that was raised in a place you know (just west of Elizabeth City) on feed that you’ve tasted (the beer you’re drinking right now)!! 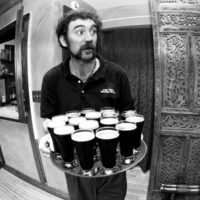